Spike in gilt fund returns – should you invest?

Over the past month, we have been receiving many queries from our customers about gilt funds. The sudden spurt in such queries has been caused by the high 1-year returns of these funds. 1-year returns of most gilt funds are in double digits. Reliance Gilt fund, for instance, had a one-year return of 16.6% as of 12th July 2019, while UTI Gilt fund had given 15% in the same period. It might seem surprising to investors when they see such high returns from funds which invest in low-risk government bonds. So what are the reasons for this anomaly? More importantly, is this an opportunity you need to act on? Let’s find out.

To start with, let us first understand what gilt funds are. Gilt funds invest in debt securities issued by the central and state governments of India. These securities usually have maturities in the medium to long-time horizon, some of them maturing as far in the future as 2099. Such bonds have a highly liquid market, i.e., they can be easily bought and sold as the risk of default is practically nil. There is, however, another form of risk associated with gilts – interest rate risk.

To understand interest rate risk, let’s take a simple example. Say last year you invested in a bond of a company which gave an interest of 9%. This year, the same company is issuing similar bonds. However, since interest rates in the economy have fallen, the company is offering only 8%. So investors, instead of lending to the company, want to buy bonds from you instead, as they would get a better interest rate. This creates a lot of demand for the bonds you hold. Since you see a lot of demand, you think of making some profits and raise the price of your bonds. If after the premium you are charging, the yield remains higher than 8%, your bonds will continue to have a higher demand than those being issued by the company now.

Eventually, you will raise the price to an extent where investors will get an effective yield of 8% even by buying your bonds. At this point, the market finds equilibrium and the demand for the bonds held by you and those being issued by the company equalizes. How much you can increase the price by, also depends on the maturity of the bond. The longer the maturity, the longer investors will continue to enjoy a higher yield, and the more they’ll be willing to pay.

This phenomenon occurs in debt markets every day. Bonds are valued based on the difference between the market yield and their own yield. This is why the prices of bonds (including gilts) are not constant and fluctuate with changes in market yields. And since gilts usually have long maturities, their prices are highly sensitive to interest rate changes.

Reason behind the recent spike in gilt fund returns 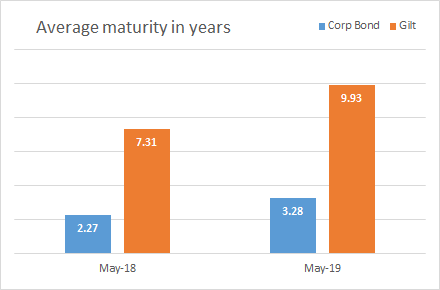 In an economy, the central bank decides the direction of interest rates; the RBI handles this in India. Now, the RBI has cut rates by 25 basis points thrice so far this year, once each in February, April, and June. Hence market interest rates have also been falling. In a market such as the current one, gilt papers tend to see a large price appreciation. This leads to an increase in NAV of the funds which in turn leads to high returns.

How have gilt funds done in the past?

Data for the last ten years shows that gilt fund returns have been quite volatile. Average 1-year returns have gone as low as -8.7% (in 2010) to as high as 26.2% (in 2009). Moreover, negative returns were seen over 5% of the time on a 1-year basis. These statistics present a better idea about the actual performance of gilt funds. What we see is that gilt funds exhibit equity-like behaviour in periods of volatile interest rates.

Here’s a look at how 1-year returns of gilt funds have moved historically, compared to the movements of 10-year bond yields. This graph shows the average return of all funds in the gilt category. 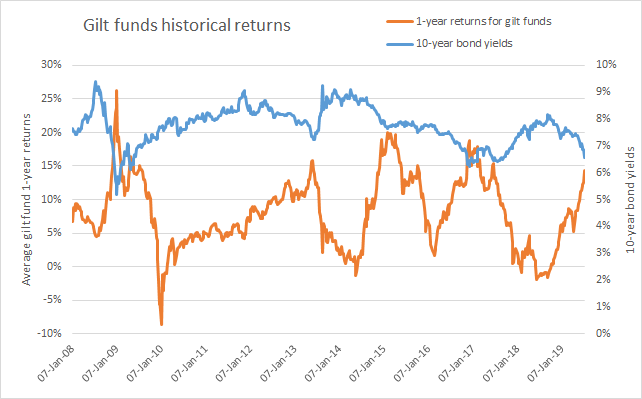 From the graph, we can see that gilt fund returns are both negatively correlated and highly sensitive to bond yields. Clearly, spikes in returns are not uncommon. However, there is also a fair chance of gilt funds yielding near-zero or even negative returns.

There are two key takeaways from all this. Firstly, investors look at debt funds as a safe investment option. Volatility and downside potential are not tolerated in debt, especially not to the extent of gilt funds. Second, gilt funds require tactical calls by investors based on their expectation of interest rate movements in the future. Timing is a crucial aspect of these funds.

In summation, gilt funds are high-risk debt funds, that are meant to work as tactical plays. These funds look to benefit from price gains in times of falling interest rates. Returns, however, are highly volatile and there is potential for negative return periods as well. In the current scenario, where the RBI has cut the repo rate thrice successively, returns have shot up. This isn’t a sustainable trend simply because interest rates don’t always move unidirectionally. So the returns you see currently may not be the returns you actually get if you enter gilt funds now.

Invest in Gilt Funds Now!
Talk to an Advisor