Are Mid Cap funds a must-have?

Over the last two years, giving the go-by to the gloomy macroeconomic situation, large caps have continued to trend upwards. With investors flocking towards safety, inflows into the market have been chasing a select group of large cap stocks.

Mid-caps on the hand, have corrected sharply since their highs in Jan 2018. This has broadly mirrored the country’s weakening macroeconomic growth. After declining for five quarters at a stretch, India’s GDP growth rate came down to 4.5% in the Sep 2019 quarter. This was the weakest growth in over six years.

The unearthing of corporate governance issues and the liquidity tightening and risk-averseness that followed the NBFC crisis too soured the market sentiment towards small and mid-sized companies. From its peak in Jan 2018, the Nifty Mid-cap 100 Index lost 29% by Aug 2019. While the index has since recovered, it is nowhere near the highs of Jan 2018.

That brings us to two questions.

Here we analyse the first question from a longer-term perspective. We will take up the second question in another post.

We first check whether mid-caps have outperformed large caps over time. If that’s not the case, why bother investing in mid-cap funds given the inherent risks involved. Several mid-cap companies have faced corporate governance issues in the past. Also, insufficient liquidity is a concern for such stocks.

We compare how the Nifty 100 TRI (Large cap Index) and the Nifty Midcap 100 TRI (Midcap Index) have fared across market cycles through 2003-19 and during the period as a whole too. 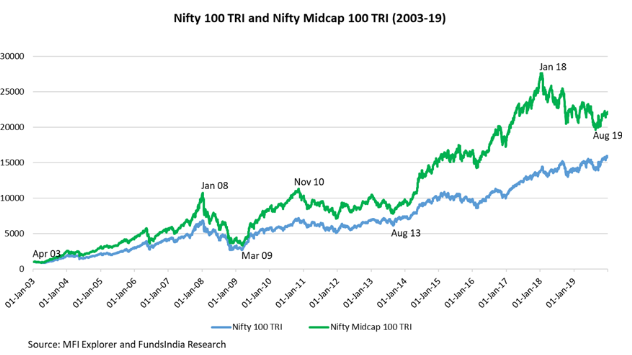 Taking a complete cycle (from peak to peak or trough to trough) ensures the analysis spans a period that includes both a market uptrend and a downturn. This is because, while large caps fall relatively less in a bear market, their rise in a bull market too can be moderate. Mid-caps, on the other hand, can fall steeply in downturns but can also recover sharply once the tide turns.

The analysis shows that the Nifty Midcap 100 TRI has outperformed the Nifty 100 TRI across all market cycles since 2003. The extent of out-performance though varies across periods – from 0.3% to 3.5%.

See the table below:

One may, however, argue that these calculations are based on the assumption of an investor staying invested through one complete market cycle. But, that may not always be the case except for by sheer chance.

So, we check if the Midcap Index has beaten the Large cap Index over the long run (across market cycles) irrespective of when the investor enters and exits. Assuming 5 years to be long term, we compare the indices on their 5-year rolling returns during 2003-19.

The results show that the Midcap Index has outperformed the Large cap Index 78% of the time by an average of 2% points over this period on a 5-year rolling return basis.

The conclusions change when we look at the short-term. Based on 1-year rolling returns, the Midcap Index has outperformed the Large cap Index only 56% of the time. Though the average out-performance at 4.2% points is higher than that for the 5-year period.

That is, the chances of the Midcap Index outperforming the Large cap Index are higher (78% versus 56%) when the investment period is longer.

So far so good. But, you may ask- how does the Midcap Index outperforming the Large cap Index prove that mid-cap funds may outperform large cap funds.

So, we take the top five (based on AUM) mid-cap and large cap funds that have been around for at least 15 years and see how they have performed during Jan 2006 – Dec 2019.

So, if your investment horizon is sufficiently long, then mid cap funds can offer you relatively better returns than large cap funds; though there will be phases of out-performance and under-performance in between that you will have to endure.

See the chart below: 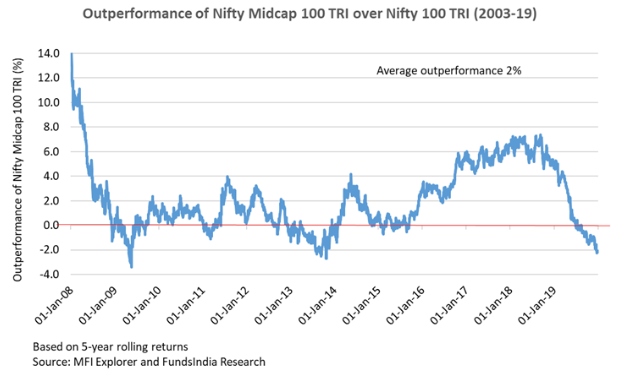 But if mid-cap funds have a higher probability of out-performance, then why not go the whole hog instead of investing only a portion of your corpus in mid caps?

That’s because one needs to consider the risk aspect too. For there’s no such thing as a free lunch.

While mid-cap funds have the potential to deliver higher returns long-term, the risk of their under-performance is also greater. The Downside Capture Ratio (DCR) makes this clear.

The Maximum Drawdown Chart (below) shows how the Nifty Midcap 100 TRI Index has fared in the down-years. 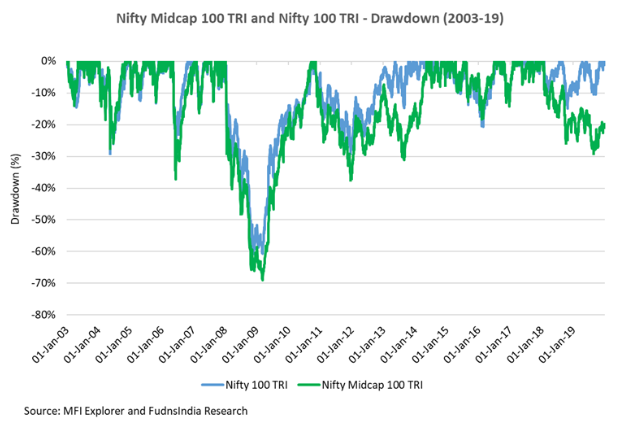 The chart plots the daily returns for both the Nifty 100 TRI and Nifty Midcap 100 TRI indices. It shows the extent of fall in each index each day compared to its previous peak until then. As the Maximum Drawdown chart shows, the Midcap Index has fallen more than the Large cap Index.

The table below picks out a few cases of sharp drawdowns from the chart. As you can see, the Midcap Index falls are steeper than those for the Large cap Index in nearly all instances. 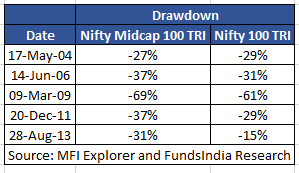 The difference between the two indices becomes clearer when we look at the Intra-Year Drawdowns. Here we plot only the sharpest (and not all) drawdowns for each year for the indices. 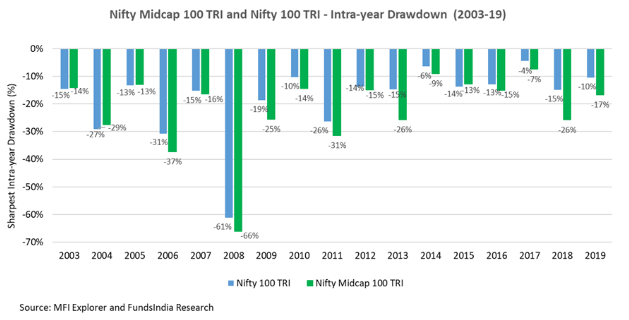 The Large cap Index and the Midcap Index returns for 2013 (from 1 Jan to 30 Dec) were 8% and minus 4%, both higher than the respective drawdowns. What the drawdowns reflect is intra-year volatility – the sharpest fall in the index returns during the year – and not between the first and the last day of the year.

So, unless you have an appetite for risk (read as the ability to withstand intermittent sharp declines) and the ability to stay invested long-term, mid-cap funds may not be for you.

Mid-caps in your portfolio?

There is, therefore, a case for investors to have midcap funds in their portfolio. But, this works only for long-term investors.

So, if your risk profile is such that you invest 60% (or higher) of your investible corpus in equity, then you can consider investing 1/3rd to 1/4th of this in mid-caps.

Essentially, there are two sides to investing in mid-caps as there are to any investment – risk and return. At any point, one will dominate the other. While it was high returns that were highlighted in the 2014-18 rally, the route after that has brought risk under focus. But, if you’ve stayed put so far, stick to your chosen asset allocation and stay invested.

Also, while trying to time your entry and exit to and from the mid-cap space is tough, one can get some sense on where one is in the mid-cap cycle by looking at some broad indicators such as valuations, market sentiment and earnings growth (more on this in a later post).

The segment sometimes enters extremes in terms of valuations, i.e when the mid-cap valuations are very cheap and the market is getting overly pessimistic on them (as seen in 2013) or valuations are very expensive and the market is becoming overly optimistic on this space (as seen in 2017). In times such as these, you can choose to raise or reduce your exposure to mid-caps. One must, however, consider setting a limit on such tactical moves.

More importantly though, most of the time (except for during these rare extremes), investors should adhere to the pre-decided mid-cap exposure in their overall portfolio.