Up, Up Goes the Market, All Else Goes Down

We live in difficult times.

What started as a medical crisis, spread to the real economy and the financial markets too. That hasn’t happened before.

This is where we stand today…

But stock markets have recovered from their lows

So, is there a disconnect? Are the markets functioning in a vacuum or are we missing out on something?

While there are no straightforward answers, here we attempt to provide an explanation.

Today, we are surrounded by many gloomy statistics on Coronavirus, the lockdowns, the hardship and the adverse impact on economic growth and hence the negative sentiment.

But there have been some big positives too – progress on medical solutions for dealing with Coronavirus, fiscal stimulus packages by governments and massive monetary easing across the world – that seem to be stemming the negative impact.

So, while the on-ground reality looks bleak, massive government and central bank action globally on multiple fronts is providing support and the fast-tracked medical developments are giving hope. This has likely moved up the markets.

Here we list out these three key factors, further developments on which in the coming weeks and months can tip the scale in favour of effectively tackling the current economic crisis.

When exactly that happens, no one can predict but markets may move well before that (as they already have).

The past few weeks have seen hectic activity on the medical front with research on Coronavirus treatment and trials of vaccines getting fast tracked.

Takis, an Italian biotech firm too has announced a potential vaccine that has shown promising results in animal testing. There are also reports of Israel’s Institute for Biological Research’s progress on developing a vaccine.

Apart from vaccines, Gilead Sciences’ Remdesivir became the first drug to get the US FDA approval for emergency use in Coronavirus patients. The drug has been approved for use in Japan too.

Governments world over have rolled out massive stimulus packages to provide support to households and businesses impacted by Coronavirus.

In India, with expectations growing with each passing day, the Prime Minister announced a Rs. 20 lakh crore economic package on Tuesday.  This amounts to 10% of the country’s GDP but includes the earlier measures taken by the government and the RBI too.

The Finance Minister’s announcement on Wednesday therefore implies an additional stimulus of Rs.6 lakh crore (or approx. 3% of the GDP). That leaves some room for more measures to be announced.

The latest round of initiatives include collateral-free loans for MSMEs and liquidity support for MSMEs, other businesses and NBFCs, among other things. The earlier Rs. 1.7 lakh crore stimulus in March targeted mainly the economically weak.

US goes all out

The world’s largest economy, the US came out with a massive $2.2 trillion fiscal stimulus amounting to 10% of the country’s GDP in March. The package extends assistance to individuals, families and businesses and has a wider scope than any stimulus ever before.

Let’s get some perspective by comparing this with what was done during the 2007-08 financial crisis.

It is also far more encompassing.

It goes much beyond providing additional unemployment benefits and higher funding for food assistance as was done in 2007. For instance, today funds have been earmarked for loans to certain large industries and small businesses. The package also includes a $100 billion public health and social emergency fund.

To see how much other countries have spent, see the News18 graphic below. 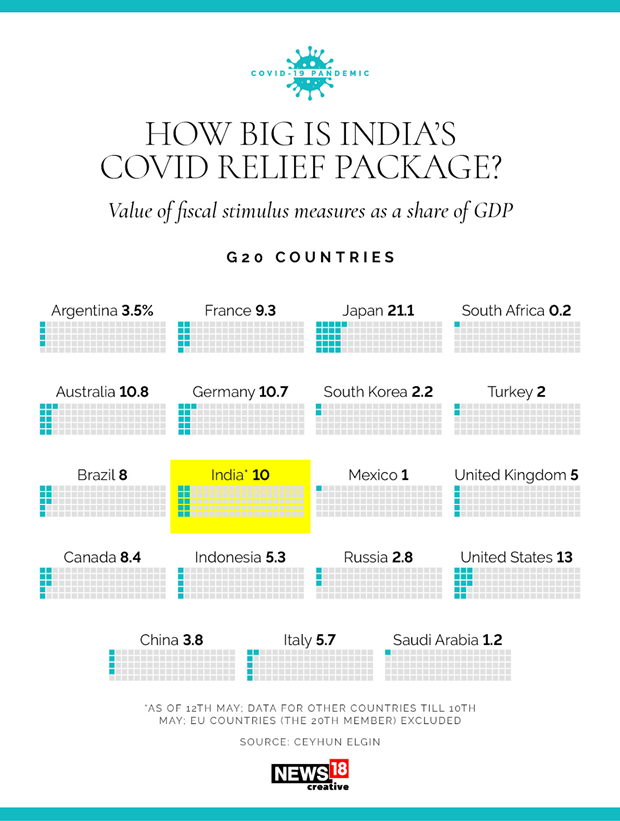 Moving in tandem with governments, monetary authorities too have come out with a slew of unprecedented measures to tackle the Coronavirus impact.

Meeting a week earlier than scheduled, the RBI unleashed a range of liquidity-boosting measures in the last week of March to steady the markets. It cut the repo rate by 75 basis points to 4.40%.

It slashed the reverse repo rate first by 90 basis points to 4.00% and then once again to 3.75% in less than a month! This was intended to incentivise banks to lend rather than deposit their excess funds with the RBI.

The RBI cut the cash reserve ratio too, by 100 basis points to 3% thereby freeing up funds for banks to lend.

The RBI also announced 1 lakh crore under the targeted long -term repo operations (TLTRO). Under this, banks were allowed to borrow funds at the repo rate to invest in investment-grade corporate bonds among other such instruments.

This was done to lend support to the Indian corporate bond market which was rattled by a spike in yields in recent times. This had been triggered by the large-scale selling by FIIs and domestic institutional investors (such as MFs) in the bond market.

Apart from that, the RBI has also raised the short-term borrowing limit (ways and means advances) for states and union territories to help them tide over their temporary cash shortages.

Further measures by the RBI, if the situation so demands too cannot be ruled out given the quickness of its moves until now.

Other central banks (especially the US Fed) too have taken drastic steps to backstop the adverse impact of the pandemic on financial markets.

These measures have been bigger and swifter today than they were during the 2007-08 subprime crisis.

Fed moves in leaps and bounds

Today, the Fed has moved more aggressively and much earlier on in the crisis. It slashed its benchmark interest rate (federal funds rate) in two swift moves and brought it to almost zero by 15 March.

Further, the Fed originally announced asset purchases of up to a certain limit to support the floundering financial markets. On 23 Mar – the Fed, however, committed to something it has never done before – unlimited asset purchases to whatever extent required.

Also, in a never-before move, the Fed announced it will buy investment-grade corporate bonds and ETFs and later added even below-investment grade to its list of assets eligible for purchase. This was done to ensure adequate liquidity for cash-crunched companies.

During the 2007 global financial crisis too, the Fed cut the interest rate to zero. But that was done only in Dec-08, a few months after fully into the crisis. That apart, while the Fed embarked on its bond buying programme (quantitative easing), the expansion in its balance sheet assets was far more gradual from $870 billion in Aug-07 to $2.25 trillion by Dec-08.

Other central banks too have been rolling out liquidity easing measures. Please see the table below for some details. 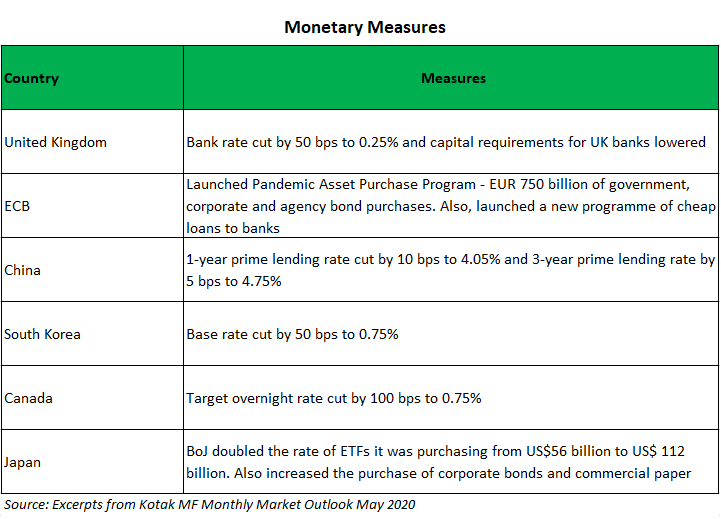 The table intends to provide some sense on the measures taken by central banks across the world and is not comprehensive. Also, with central banks continuing to take further action, the table may not include all the latest developments.

The barrage of fiscal stimulus and more importantly monetary intervention the past few weeks has buoyed markets in India and globally. The latest stimulus announced by PM Modi is expected to provide further support to the Indian stock market.

Following the RBI’s policy announcements on 27 Mar, the benchmark 10-year G-sec yield which had earlier surged to 6.41%, eased to 6.14% by month-end. Thanks to the higher demand for corporate bonds from banks following the TLTRO, AAA bond yields too have eased. The 3-year AAA bond yield has come down sharply from 7.8% on 24 Mar to 5.9% on 11 May-20.

With banks deploying the funds raised under TLTRO in the debt market, many companies have been able to raise cheaper funds.

In the US too, companies have been able to raise funds cheaply from the bond market. This became possible thanks to the Fed’s offer to buy corporate bonds and corporate bond ETFs as part of its asset buying programme to infuse more liquidity.

The easing of lockdown restrictions and gradual restart of economic activity in India and globally, too has been welcomed by the markets.

Developments on the medical front which give hope on some progress towards tackling Coronavirus (treatment and vaccine) too have had a positive impact.

Given all this, it is not completely surprising that markets have recovered from their March lows.

And while the real economy will take time to recover and revert to normal, policy actions are holding up the economy from falling into a deeper crisis.

What it means for investors

We haven’t seen a crisis that has impacted people and economies (real and financial sector) across the world as has the Coronavirus.

There is probably no precedent in recorded history (except for the Spanish Flu of 1918) of such an event.

But what is also unprecedented is the rapidity and the quantum of action – both by governments and central banks as well as the medical community – at the global level – to deal with the current crisis.

Some of these measures have already had an impact, while others may in the days to come. Many countries are gradually easing their lockdown restrictions too.

As we very gradually ease into normal life, businesses restart, demand picks up and supplies resume, the markets may move up further (they already are), even though this may be interspersed with volatility and may take time.

For investors who are exiting now only to return later, it will be hard to precisely time their re-entry.

In uncertain times as today, it’s probably best to do what is probably the toughest – Do Nothing.

That is, just stay invested and resist the urge to act. Staying invested, instead of exiting now (taking a loss) and then re-entering later (to recoup the earlier loss) can be a safer strategy.

Predicting the bottom is hard (has never been easy) because there is a mix of opposing factors at play – rise in Coronavirus cases and the economic impact of the shutdown on one hand and the government and central bank response on the other.

Aggressive investors, can however consider deploying their surplus cash in a staggered manner. But, given the expected near-term volatility, such investors must be prepared to remain invested for 5 years.

There, however remains one big near-term risk – the possibility of a spike in Coronavirus cases post 17 May (end of the current shutdown) and a revert to restrictions imposed earlier.