Short on time? Listen to a brief overview of this week’s review.

A new entrant to the Select Funds list in our June quarter review is Aditya Birla Sun Life Balanced ’95. Among the oldest balanced funds, it holds around 70% of its portfolio in equity with the remaining in debt. Its performance has gradually improved from 2014 onwards, as it played the debt space to its advantage while lifting equity exposure in the stock market rally.

Balanced funds are also a less volatile and lower-risk route to equity investments, especially for conservative or even moderate risk investors. First-timers in equity markets – and especially in current market conditions – can also opt for the balanced route initially before moving more into equities. On this count, Aditya Birla Sun Life Balanced ’95 (BSL Balanced ’95) has usually lost less than the category in correcting markets. The average rolling 3-year return for 10 years has the fund close to the top of its category, behind only a few stalwarts such as HDFC Balanced and Tata Balanced.

ABSL Balanced ’95 has usually managed to stay above the average, but has done especially well in the past three years. This saw it move from a second-quartile performer to a top-quartile one now.

One factor driving the performance was the timely raise in equity exposure post August 2013. Equity allocations were between 72-74% for much of 2014 and the first few months of 2015. In the brief market corrections and spurts of the subsequent years, the fund deftly lifted and dropped the equity exposure between 65% and 72% to maintain its superior performance. This is where it differs from peers such as HDFC Balanced, L&T India Prudence, and Tata Balanced which tend to maintain equity exposure in a narrower band.

Second, ABSL Balanced ’95 actively managed its debt exposure to improve returns. It began picking up government securities in 2015 and by 2016 it accounted for nearly the entire debt exposure. This paid off very well in the gilt rally. In the past few months, though, the fund has cut down on gilt holdings to 10% of the portfolio, given that the rate cut cycle is nearing the close. In this, it differs from peers such as HDFC Balanced, which are still betting on duration. ABSL Balanced ’95 took credit calls briefly in years such as 2015 when papers rated AA+ and below formed about 9% of its portfolio, which also helped boost returns. It has since cut down on this, with such papers less than 2% of its portfolio now. 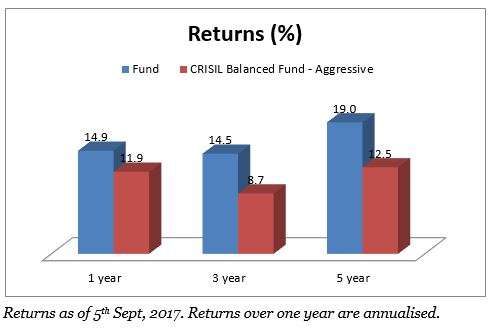 ABSL Balanced ‘95’s improved performance has also helped lift its risk-adjusted return (measured by Sharpe ratio) higher against the peer average. Rolling 3-year returns over the past ten years has the fund beating the CRISIL Balanced Fund – Aggressive index 93% of the time, pointing to a good record in consistency. The average margin of this outperformance is around 5 percentage points, close to peers such as HDFC Balanced and Tata Balanced. The average margin of outperformance against the category average is about 3.5 percentage points. The fund also scores above the category average in containing downside volatility.

In its equity holdings, ABSL Balanced ’95 has increased allocations towards large-cap stocks and now has a higher holding here than peers. Given the pricey nature of mid-cap stocks, this move looks to be prudent. In another risk-mitigating move, it holds a diffused portfolio with stocks numbering well over 50. Individual stock holdings rarely move above 5-6% of the portfolio.

In its stock picking, the fund mixes a value and a growth approach. The latter approach, though, is more prominent. Consumer goods is a sector it has added to in the past year, through stocks such as ITC, Emami, Shoppers Stop, Titan Company and so on. It has also upped stake in financial services, in both private sector banks and NBFCs. Automobiles form a good chunk of the portfolio, though it has not really increased stake in this sector. Media is another sector where the fund has maintained an exposure. These sectors should help returns in the short to medium term, given that cyclical sectors such as capital goods and infrastructure could take off only in the longer term as growth is still sluggish. However, the fund has taken timely calls on cyclical sectors such as metals and energy in the past couple of years.

On the debt front, the fund has moved back into accrual from an earlier duration play. It holds minor exposure to higher-yielding state development loans apart from top-rated corporate bonds.

The fund’s AUM is Rs 10,147 crore. Its managers are Mahesh Patil, Pranay Sinha, and Dhaval Shah.

FundsIndia’s Research team has, to the best of its ability, taken into account various factors – both quantitative measures and qualitative assessments, in an unbiased manner, while choosing the fund(s) mentioned above. However, they carry unknown risks and uncertainties linked to broad markets, as well as analysts’ expectations about future events. They should not, therefore, be the sole basis for investment decisions. To know how to read our weekly fund reviews, please click here.